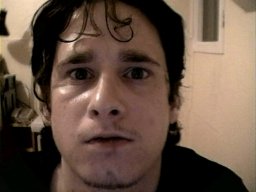 ever wake up and realize that you've finally gone over the deep end? you're a flippin' loony ready to be sent to the institution? hell i always figured that it's not quite right you know. what you ask? nothing . it just ain't right.

so like when you figure that you're crazy and there's nothing you can do about it, waita second , maybe you're not so bloody crazy. maybe - just maybe - you've finally realized how bloody crazy this whole damn wo rld is and in doing so it's the first time in your life that you've actually ever been sane .

of course this is my theory and the giant purple cow that just walked into my office disagrees. i don't usually listen to the advice of giant purple cows, except that this one is armed to the teeth ... or should i say, armed with teeth . giant teeth. god and they say i'm the one who's insane . it's a rather frightening thing really. the cow is pretty scary too.

of course the fact that there is a giant purple cow standing in my office disagreeing with everything i say, telling me that i'm just a n utcase is a certain sign that things must be getting better. i mean it sure beats the time the tiny green haired cat with antlers tried to convince me that it was the second coming - of elvis.

of course i knew that to be a falacy since elvis is most certainly locked in the basement of my one story trailer, living it up drinking fine wine and eating blue rare pork chops on his new macrobioctic kosher Jewish diet while working on the question of life the universe and everything.

i mean when it finally dawns on you that if the answer to the question is 42 and the question itself is 6 times 9 you should finally realize the absolute truth of all existence leaving only one question left to be answered, "why?"

the giant purple cow doesn't know either. which is good because i think he's got the wrong office.