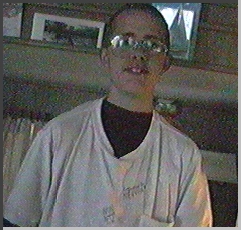 Jason was my friend. One of my best friends.

When I was in grade 3 there were two elementary schools in Aschcroft. Aschcroft Elementary, and Coppervale Elementary. I went to one, and Jason went to the other, but we got to know each other, and when Coppervale closed in grade 4, Jason came to the same school as me, and we became inseperable. We would talk during recess and lunch non stop, creating fantasy worlds in our heads. In fact the world we created together lives on, known as the Xadaeryn Universe. It will always remain as a memory of how we used to dream up wild worlds when we should have been doing school work. 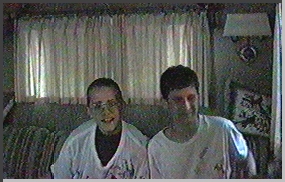 During the summers we would explore the uncharted territories of Cache Creek, Ashcroft and Boston Flats. We went to each others birthday parties for several years. Jason and I made some really far out episodes of The New Era together, which is where I got the pictures for this page.

He was always a friend. We shared secrets that we would tell to no other living soul. We knew each other as though we were brothers. For the most part everyone who was a friend of his was a friend of mine, and vice versa.

We swore that no matter how far apart we lived, we would always be friends. Even after having been gone for two years I could come back and visit, and we would be back on the fast lane, joking around and having fun. I never thought he would leave. Jason, and some of our friends, Ryan and Nathan Lewis, together with the rest of the kids in our group from Boston Flats, Cache Creek, and Ashcroft, would get into all sorts of trouble, and have a great blast the whole time. Even after moving to the Kootenays, I have kept in touch with them through the internet, talking to Jason and Ryan whenever we happened to be on at the same time.

When I heard that Jason had passed on, I didn't know what to think. I couldn't believe it, I didn't want to believe it. I wrote a trusted friend to make sure I wasn't in some kind of nightmare. But I was not to awaken from this one. My friend was gone, without warning or apparent reason. We sit emotionless as we watch things like this happen on television every night, but the terrible emptiness and shock when it happens to someone you know, someone close to you, is painful beyond words. I cannot properly describe how I feel on paper or on screen, I cannot even speak the words to express the loss I feel. My heart aches for my friend now gone. But he wouldn't want me to wallow in sorrow, he would want me to be strong in a time like this. Jason was a strong person, he was a good person, and he was a great friend.

Jason may be gone from this earth but where he is now is a far better place. I hope he will remember his friends until we meet again, because I know that we will never forget him.